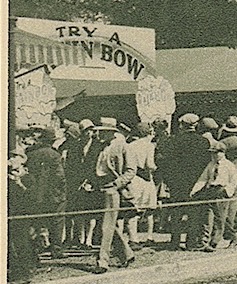 In 1927 two brothers, Barney and Jim Davis, hammered together a few boards to make a concession stand -- and started selling ice cream at the Minnesota State Fair.

They sold chocolate, strawberry, and vanilla. Each day they ran out of one flavor or the other. So, they asked a friend at Northland Ice Cream if he could make an ice cream combining all three flavors together. TA DA! The birth of “Rainbow Ice Cream” at the Minnesota State Fair.

In 1905 Harry Brooks, an enterprising 12-year-old with a horse cart, started selling produce. With a family recipe for caramel he started making Caramel Apples -- and Barney and Jim sold those as well.

In the 1950s Jimmy Davis was traveling the mountains of Peru. On the side of the road he saw a man selling chipped ice with sweet colored flavoring on it. They were obviously popular, and they sold well during the heat of the day. A few years in the U.S., a commercial ice chopper making “snow” was developed.

Remembering the chipped-ice in Peru, Jim bought one machine. During the summer heat of the State Fair that first snow cone was a hit – first selling for 5¢.

Over the years Barney & Jim tried new food items yearly. From the 1964 NY World’s Fair came “Belgium Waffles.” They even tried a round Ding-Dog in the 1950s. New novelties came and went, but the eternal taste treats are always: Rainbow Ice Cream, Sno Cones, and Caramel Apples.